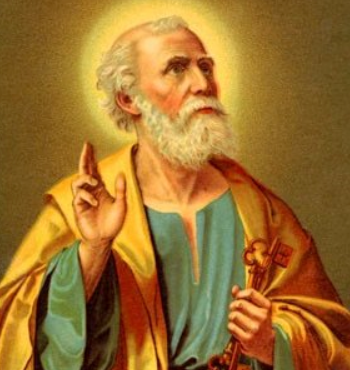 Peter was a fisherman from Galilee.

He was a simple, hard-working man. He was generous, honest and loved Jesus very much. Jesus invited Peter and his brother Andrew to follow him, saying “follow me and I will make you a fisher of men”.

Peter’s name was Simon, but Jesus changed it to Peter, which means ‘rock’.

Jesus said “You are Peter and on this rock I will build my Church”.

Peter became a disciple and followed Jesus, becoming one of his closest and most trusted friends.

Jesus told Peter he would ‘give him the keys to the Kingdom of Heaven’.

When the Roman soldiers arrested Jesus, Peter was very frightened and denied knowing Jesus three times before the cockerel crowed.

He was truly sorry for this and Jesus forgave him.

After the resurrection, Jesus asked Peter to “Feed my lambs. Feed my sheep”. He was telling Peter to take care of his followers when he was gone, because Jesus was going to ascend into Heaven.

At Pentecost, Peter was the first Apostle to preach. He became leader of the Apostles and head of the Church. He performed a miracle, curing a lame man.

Peter later went to Rome. He converted many non-believers there, and became the first Pope. St Peter died in Rome and St Peter’s Basilica, Vatican City now stands where he was buried.